Fang’s Rules for Gig Etiquette (aka Don’t be a Dick!)

Manners. Etiquette. Remember those things your mother tried to teach you? “No, honey, that’s the SALAD fork.” Turns out they’re actually pretty important in the real world.

Every situation has its own social rules that must be followed if you don’t want to appear to be a jackass, and gigs are no exception. No one’s ever really set those in stone, or even written them down from what I can tell. It’s more of a “you learn it as you go” situation.

So, for those of you who don’t have natural gig manners, allow me to present:

The salad fork is like…your guitar? Maybe? I’m still working on this…

By following these guidelines, you can make yourself and your band appear professional, friendly, and professional. Did I mention professional? Because that’s rather important. If your eventual goal is to turn your passion into a thriving business, you must always have this mindset, and you must always give this impression. A professional band with a history of good attendance, good merch sales, and rational management is a much juicier apple for a label to pluck rather than a haphazard (albeit talented) group of high-school-acting-drunk-ass-garage-band dropouts.

Oh Business Cat, you so professional!

This one is so simple, it should really go without saying. I only include this because of the extreme amount of tardiness that I’ve seen in this business over the years. Think of it this way – if you hired a plumber who said “I’ll be there at 2pm,” and he didn’t show up until 3pm, would you be pissed? You bet you would! Would you ever hire that plumber again? Probably not. Being on time doesn’t stop once you’ve arrived at the venue, either. Communicate with the venue before the show and determine the following things:

Also, make sure you either have a smartphone or the venue’s phone number written down somewhere. When your van blows a tire on the way to the venue, you can call them and inform them of the situation. There is no excuse for a lack of communication. This isn’t the 1970s. Everyone has cell phones.

Of the time constraints, the ones that pertain the most to appearing professional are: arrival time, load-in time, and set time. If you only have 30 minutes for a set time, don’t go over. Just don’t. The sound guy, the manager, the booking agent, and all the other bands that play after you will be angry. There’s nothing worse than telling the last band of the night that they only have ten minutes to play because “everything ran late”. Always best to under-budget your set time – if you play five minute songs, plan for five (25 minutes). That’ll leave some time for your guitarist to break their string, or for you to go on your rant about how credit card companies are secretly controlling global fluoride levels in our drinking water. You weirdo.

There are also internal time constraints to consider. For example:

All of these things can impact your arrival time. Make sure to always allow yourself more time than you think you need. You will need it. And if you don’t, no one ever complained when a band showed up too early.

2.      THE TRAVELING BAND PLAYS BETWEEN THE LOCAL BANDS

Next up, ladies and gentlemen, “The Oh God My Eyes”!

If you’re a traveling band who doesn’t have a huge draw in the city you’re currently in, you shouldn’t be expected to play first or last (we’re assuming here that the show is a “normal” three band bill). If you play first, people are still coming in the door. If you play last, everyone’s already left. Dead center is the sweetest spot any band can play. You get the biggest crowd. You’ve captured the latecomers and the fans who turn into a pumpkin at midnight. This ensures that you get the most visibility, and hopefully the most merch sales and new fans.

This also speaks to bands that create shows and invite traveling bands. Unless the band(s) you’re inviting are A) semi-big/famous or B) already have a large fan base in your city, do not book more traveling bands than local bands. Do you know what those shows look like? Ghost towns. Best situation is a 2-to-1 ratio of local bands to out-of-town bands. In the case of a 4 band show, a 1-to-1 radio is ok, but the out of town bands should play 2nd and 3rd.

Quick anecdote: we put together a show with us, another local band (who shall remain nameless), and a fantastic traveling band. The local band was rather established, so we assumed they would understand that the traveling band would go second, and they would go first. They put up the biggest hissy fit I have ever seen, and even threatened to leave immediately if they didn’t play second. I used to be a fan of their music – now they’re just dicks. And the management of the club knows it as well.

3.      THE TRAVELING BAND GETS GAS MONEY BEFORE ANYONE ELSE

If you’re the local at the show, how much money did you spend to get there? Maybe $1 in gas? Want to venture a guess as to how much gas, food, lodging, and general expenses cost a traveling band? Probably quite a bit more. Ask them how much they’ll need to cover gas and expenses. Try to give them as least $20 more than this amount, then pay the rest of the bands. If the locals go home empty-handed, it’s their fault for not selling any merch!

This is one of those “what goes around comes around” situations. If you always follow this rule, the bands that you play with when you travel will remember how they were treated, and treat you in a similar fashion.

4.      HEADLINING SUCKS, BUT SOMETIMES TAKE ONE FOR THE TEAM

“Big shout out to Dave who stayed all the way to the end!”

Gone are the days of hoping for your band’s name on the marquee. Playing last or headlining is the worst, with very few exceptions. Assume 70% of your fanbase are adults with normal, 9-to-5 jobs. What time do they normally go to bed? Probably 11pm. When you’re headlining, your band probably won’t play until 12:30am. Even if you’ve got a FANTASTIC set of opening bands, 11:45pm will roll around and your fans will start feeling like going home to sleep. There’s nothing you can do about that – it’s biology. That means that 70% of the people who come out for the show will be gone by the time you take the stage.

How can you combat this? There are a number of tricks you can pull, but at the end of the day, the honest answer is that you really can’t. However, someone’s got to go last. And if this is a local show, sometimes it’s going to have to be you. Don’t complain. If you take one for the team, the team is a lot more willing to take one for you in the future.

I have seen all of these things firsthand. I have done none of these things, but I have had band members who have done some of these things. And I have had to apologize profusely to the venue’s management on behalf of them and the band, and beg and plead to be allowed a second chance to play. “No, sir, it’ll never happen again! I swear!”

You want to be a professional? Then act like it. I don’t care if you feel like you need a few drinks (read: a FEW) before a set to loosen up. That’s fine. Just don’t do anything that would adversely affect your playing. Remember: while you’re in the venue, you’re technically an employee of that venue (they’re paying you money for a service). Do you think that my daytime job lets me get wasted on the clock?

Even if you’re the best band in the whole goddamn world, the manager will remember you for the worst thing you did, not for you music. The bands that passed out in the bathroom and puked on the floor never played again. Don’t be a dick. Get wasted at home – it’s cheaper.

6.      INTRODUCE YOURSELF BEFORE THE SHOW, THANK THEM AFTER THE SHOW

The sound guy and the manager need to be your two best friends of the night. You need to make their lives as easy as possible, because they’re the guys that are going to invite you back and make you sound as fantastic as you think you do. Before the show starts, introduce yourself, thank them for the job they’re doing, and tell the sound guy any technical specifications you have.

After the show, thank them for the fantastic sound (even if it was terrible), and let them know you’d love to play the venue again sometime. You want to leave them thinking you’re a nice, professional young man who they’d love to work with again in the future.

Even if a band is the most horrible band you’ve ever seen, don’t badmouth them at the venue. It’s unprofessional and uncool to talk about how bad someone is within earshot. Let their music and their actions speak for themselves. Besides, every fantastic band starts out (or has members that start out) as a horrible band. Iron Maiden and Dio were probably terrible at some point. Would you dare to badmouth them now? You never know where people will be (or WHO they will be) 3 years from now. Don’t leave them with a bad impression.

Once the gear’s loaded, the windows are up, and the van’s pulling away from the venue, THEN you can bitch about how horrible the bands were.

Borrowing equipment and it breaks? Fix or replace it. Other band needs a cable or string? Give it to them. Change for a five? Yup, you’ve got it. Once you’re done loading your equipment in/out, offer to help the other bands load.

In this business, your friends are everything. Your business contacts are everything. And maintaining a good relationship with those people is extremely important. Want to know how to play that opening slot for that huge show that’s going to sell out? Know the people who can put you there. I’ve made some very good friends who would give me the shirts off of their backs because I’ve helped them out along the way.

Before you act, step outside of yourself and ask – how would I react to my own approach?

Always strive to forge stronger friendships, give only constructive feedback, and make business better for all around you. By helping others, you will help yourself and your own band tenfold.

REMEMBER: DON’T BE A DICK! 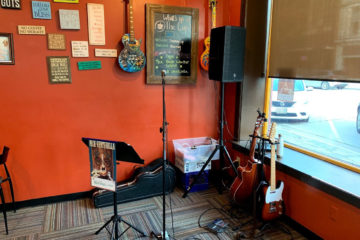 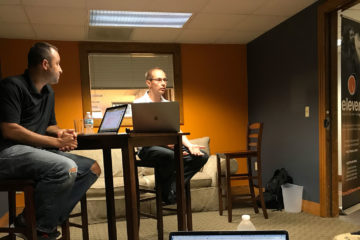 The Value of Music Coworking for the Music Entrepreneur

While being a musician involves writing, rehearsing, recording, and performing your music, that makes up about 20% of what needs to get done in order to thrive as a professional musician. 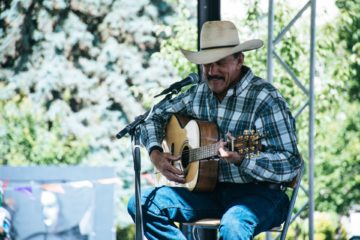 Your Band Your Business

If you perform as a solo singer-songwriter with guitar and/or piano, or if you have a small band, you are likely looking for gigs at local venues such as coffee houses, church and community music centers, and Read more…